You are using an outdated browser. Please upgrade your browser to improve your experience.
Skip to content

Back to Wycliffe Well 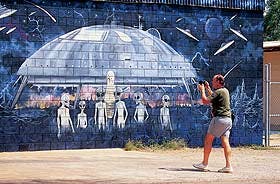 Wycliffe Well, located 130 kilometres south of Tennant Creek and 380 kilometres north of Alice Springs, has built a reputation around extraterrestrial sightings in the area. Wycliffe Well began as a market garden to supply the troops going to and from Darwin during World War Two. As the highway developed further after the war it became a roadhouse supplying fuel and provisions to travellers and eventually as tourism increased has transformed into a substantial and well equipped holiday park. Located nearby is the Karlu Karlu / Devils Marbles Conservation Reserve and the gateway to the Davenport Range (proposed) National Park